"Infuse the Goodness" with your own Tea Spot Tote made from recycled plastic. Simply "add to cart".

Antioxidants and Health: How tea processing affects its antioxidants

Tea, red wine, chocolate, blueberries, asparagus, and other fruits and vegetables are rich in flavonoids, a type of polyphenolic antioxidant. Lucky for us (since those are all so tasty!) diets rich in flavonoids have displayed positive effects on an array of chronic diseases including heart disease, certain cancers, and Type 2 diabetes. Tea is a potent source of flavonoids, and tea drinkers have been observed to have 20 times higher levels of flavonoids than non-tea drinkers. Overall, tea has particularly high concentrations of polyphenols which have antioxidant, anticancer, antibacterial, and antiviral characteristics.

Despite the diversity in appearance & flavors, all tea comes from the same evergreen plant, Camellia sinensis. Different categories of tea (white, yellow, green, oolong, black, and pu’erh) are created by the way the leaves are processed. The major delineator in tea categories is the level of oxidation that the leaves are subject to, following this general pattern:

Oxidation of the tea leaves changes the appearance and aroma of the leaves, the flavor profile of the tea you drink, and also changes the form of polyphenols in the leaves. As tea oxidizes the simple polyphenols are converted into more complex forms; specifically, with increased oxidation catechins levels decrease while theaflavins and thearubigins increase. So, white tea has the highest level of catechins, followed by green tea, oolong, and black. Conversely, black teas contain high levels of theaflavins and thearubigins, followed by oolong, green & white. 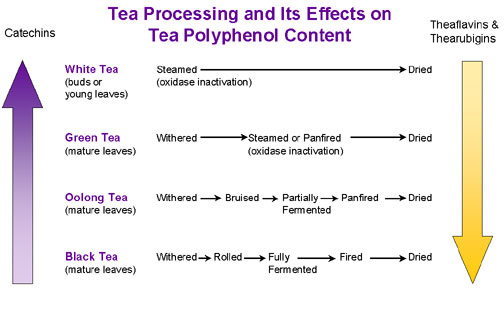 Different polyphenols appear to offer different health benefits. There is a growing volume of research on teas’ effects on humans, so here is the cliff notes version for the bulk that I’ve read… Catechins, found in white and green teas, are gaining special attention for their anti-inflammatory and cancer fighting abilities. One catechin, EGCG, is being studied extensively for its potential effects on cancer and neurodegenerative diseases such as Parkinson’s, Alzheimer’s, and HIV-associated dementia. Oolongs and pu’erhs are being studied for their weightloss mechanisms. Black tea consumption is corrolated to decreased risk of heart disease, hypertension, and type 2 diabetes. While multiple studies suggest that daily green tea drinking significantly decreases our risk of many cancers including skin, ovarian, breast, prostate, colon, stomach, and oral among others. However, there are still some studies with conflicting results, which calls for more clinical research on humans.

Different polyphenols offer us different health benefits, thus you’ll receive a variety of benefits from drinking a range of teas. Catechins, found in white and green teas, are gaining special attention for their anti-inflammatory and cancer fighting abilities. One particular catechin EGCG (epigallocatechin-3-gallate) is being studied extensively for its potential effects on cancer and neurodegenerative diseases such as Parkinson’s, Alzheimer’s, and HIV-associated dementia. These studies are looking into the effectiveness of EGCG in the prevention as well as treatment of these diseases. One Japanese study also found that EGCG was an effective inhibitor of allergic response. It was suggested that the EGCG compound blocked the production of histamine and immunoglobulin, two compounds that trigger and sustain allergic reactions in the body. So when you get the sniffles during spring, you might try this home remedy for clearing up your sinuses. (Here’s links to our whites & greens: Snowflakes, Meditative Mind, Boulder Blues, Green Roasted Mint)

Oxidative stress also plays a role in many types of cancer and heart diseases. It’s suggested that antioxidants in tea reduce oxidative stress by scavenging free radicals before cell damage occurs to proteins and DNA. Dietary supplementation of tea antioxidants has been observed to inhibit certain cancers, showing promise in both prevention and treatment. These cancers include skin, ovarian, breast, liver, stomach, colon, prostate, esophageal, and oral cancer, among others.

Many preliminary studies performed on lab animals show promising results for the effects of tea on cancers, but results of human studies are varied though some show dramatic effects. One Swedish study examined over 61,000 women between the ages of 40-76, for a 15 year period, and found that women who drank two or more cups of tea per day reduced their risk of ovarian cancer by 46% compared to non-tea drinkers; the effect was additive, such that with each additional cup of tea per day there was an additional 18% lower risk of ovarian cancer. Another study in China, where green tea is a staple, examined 18,000 men and found that tea drinkers were half as likely to develop stomach or esophageal cancer as men who drank little to none, even after correcting for smoking and diet. In vitro studies at UCLA and University of Texas found that green tea extract inhibits breast cancer cells from making a chemical that supports tumors. Similarly, a study at USC examined over 1000 Asian-American women in the Los Angeles area, and found that drinking even 6 tablespoons of green tea a day decreased breast cancer risks by 30% compared to non-tea drinkers and up to 50% risk reduction if she drank more green tea; they found that this green tea effect persisted regardless of other factors such as smoking, drinking alcohol, red meat consumption, age, Asian ethnicity, menopausal status, menopausal hormones, calorie intake, number of past pregnancies, exercise, or whether she had a history of breast cancer in her family. However, another cohort study of over 58,000 men and 62,000 women from theNetherlands did not find a link between black tea consumption and protection against cancer (specifically, stomach, colorectal, lung, and breast cancer) after removing other factors such as diet and smoking. While there is no doubt that tea is a potent antioxidant, there still appears to be some conflict in clinical study results potentially due to confounding factors such as genetics, diet, exercise, and environmental exposure. More studies should illuminate the exact effects of tea on humans, and determine the mechanism that tea is metabolized in the body so we can better understand this relationship.

Tea is also being studied for its effects on diabetes. It’s suggested that its antioxidant properties help in regulating insulin signaling and glucose metabolism. Preliminary results from a USDA study links tea consumption with decreased risk of Type 2 diabetes, a major disease in theUnited States with increasing occurrence.

Teas other benefit includes weight management. Oolongteas, also called wu-long or wulong teas, have gained some recent recognition as weight-loss teas. One study of 102 Chinese women found that oolong consumption over 6 weeks led to body weight reduction. Another study compared a group of Japanese women after drinking a cup of tea after meals; they each spent a period of time in an oolong tea drinking group, a green tea group, and a control group where they drank only water. The results showed that oolong drinkers had higher resting metabolisms than green tea drinkers at both 60 and 90 minutes after consumption, and both had higher resting metabolisms than those who drank just water. In this study, the oolong contained roughly half the caffeine and EGCG than the green tea, while the polymerized polyphenols were doubled. The results suggest that oolong tea increases metabolism through its polyphenols rather than just through caffeine. Increased metabolism results in reduced body fat. Most notably is reduction in visceral body fat – the type of fat found between internal organs that creates the “beer belly”. While this can not be seen as a weight-loss panacea, it is a perfect complement to healthy eating and exercise. (Check out our premium Vintage Oolong)

Black teas are known to assist in cardiovascular health. They have been shown to decrease LDL cholesterol levels, decrease total cholesterol, and dilate blood vessels which decreases blood pressure. There is a strong correlation between black tea drinkers and decreased cardiovascular diseases, including hypertension. One study found that adding milk to tea bound the antioxidants to the milk proteins making them inactive, but a subsequent study found that this was only true in the cup, and that antioxidants became bio-available again in the body’s serum. So go ahead and add milk to your tea if you’d like, and still reap the health benefits. Black tea is also noted for its anti-bacterial characteristics, and is said to kill bacteria in the mouth that cause bad breath and gum disease. In addition, the fluoride found in all teas helps strengthen teeth and prevent tooth decay. (Here’s a link to our blacks: Earl of Grey, Mango Tango, Crème Caramel, Bolder Breakfast)

I have not run across scientific studies on the health benefits of pu’erh. However, Pu’erh has long been considered a healthy tea by the Chinese, and medicinally, is believed to invigorate the spleen, relieve dampness, counteract alcohol toxins (ie. hangover cure), release stomach heat, and descend stomach qi (or chi). Pu’erh has also been considered a weight loss supplement due to its ability to aid in fat metabolism. (Check out our Bolder Breakfast – a black tea, pu’erh, & chocolate blend.)

The bottom line is that variety is the spice of life – it’s true with tasty foods, music, cultures, and it’s also true with antioxidants. So feel free to indulge yourself with all varieties of tea as part of your healthy lifestyle. There is a world of teas to choose from – literally. So cheers to our health!