Having lost my old yixing teapot to a roommate’s clumsy hands, I think I’m in the market for a new one. In case you’re unfamiliar with yixing clay teapots, here’s a particularly artful one donning a cicada (a Chinese symbol of life after death): 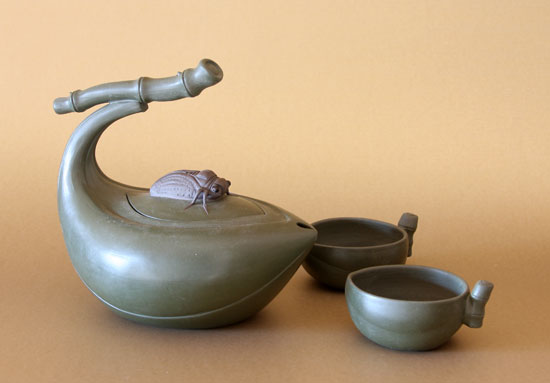 I’m more interested in traditional yixing shapes, but I had to respect the craftsmanship involved in this design. These pots are made from clay in Jiangsu, China, and the tradition dates back to the Ming dynasty by most accounts. They’re typically small, for personal use or gong fu ceremony, but can also be quite large.

There’s something bizarre about the connection one can establish with a teapot, especially when that teapot seems more unique and special than others. Because a yixing pot should be seasoned by use with only one particular kind of tea, it becomes especially valuable to its owner. The yixing pot becomes ceremonial, a meditative agent, itself a sort of antioxidant to inhibit stress on the body.

Yixing pots often remind me of bonsai trees (another past hobby I’d like to return to): they are revered for their age, they are trained carefully to respond and perform in a certain manner, they demand as much care and grace from their owner as their maker gave them, and though they may be small, they remind us of the beauty that is everywhere–sometimes far, far away.